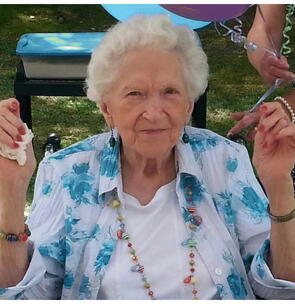 Back to Martha's story

Martha Pauline Wright Grubb of Columbia, SC, formerly of Welch, WV, passed away on Saturday, January 18, 2020, in Columbia after a short illness. She was 98.
Pauline was born in Maybuery, WV, June 26, 1921. She was the daughter of Marvin French Wright and Mary Jane Widener. She graduated from Elkhorn High School as salutatorian in 1939 and retired from the Welch Daily News in 1989. Pauline was a member of the First United Methodist Church in Welch and played the piano for them for seventy years. She played piano for many special events in the Welch area and often joked that she had played the piano in every church in McDowell County.
She married Marvin W. Grubb, Sr. September 29, 1940, and was married for 70 years until his death in 2010. She moved to Columbia in 2015 and resided at Brookdale Columbia Senior Living where she was an Ambassador and continued to play the piano for church services and special occasions. Pauline was a blessing to those who knew her and will be missed by many friends and family members. The most important focus in her life was her faith in Jesus Christ.
In addition to her parents and husband, Pauline was preceded in death by her brother, John Andrew (Bud) Wright and his wife Joyce.
Surviving are sons Marvin W. (Pat) Grubb, Jr. and wife Marty of Columbia, SC; John Michael (Mike) Grubb and wife Debbie, also of Columbia; six grandchildren; seven great-grandchildren; three great-great grandchildren; nieces and nephews.
Funeral service will be held at 11:00 a.m. on Thursday, January 23, 2020 at Roselawn Funeral Home. Burial will follow in Roselawn Memorial Gardens in Princeton, WV. Visitation will be from 10-10:45 a.m. prior to the service.
Published on January 20, 2020
To plant a tree in memory of Martha Pauline Wright Grubb, please visit Tribute Store.

Plant a tree in memory
of Martha

A place to share condolences and memories.
The guestbook expires on April 19, 2020.

Frances (McGonagle) & David Almond
Our thoughts are with you. While We did I not directly know Mrs. Grubb, we've heard lots of stories about what a wonderful and talented lady she was.
She will be missed by many.
Fred and Mary Lou Odum
Pauline was a special lady and we will miss her so much. When we walked Summers St we could not pass their home without stopping to find out the news on the street or the neighborhood. She was loved by everyone and always had a smile and a comment. Marvin is rejoicing and they are sitting side by side greeting everyone like they did on Summers St. ❤️
View all