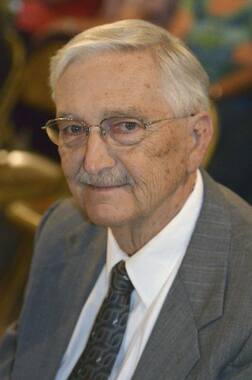 Back to Dewey's story

Dewey Levi Conley, 79, of Bland, VA, went to be with the Lord he served on Monday, January 27, 2020. He was born May 3, 1940 at Bland, VA, the son of the late Harvey Rudolph & Ila Hart Conley.
Lovingly nicknamed "Dew Melon", he was soft spoken, always smiling and never met a stranger. He achieved an Associate's Degree in Theology and continued to have an unwavering faith throughout his life. He was a member of the Hollybrook Church of Christ. He was a veteran of the United States Army Reserves. He was an avid sports fan and especially enjoyed watching the Chicago White Sox baseball team.
Besides his parents, he was preceded in death by one sister, Janie Stanley.
Left to cherish his memory are his daughters & son-in-law, Rebecca Y. Conley and Glenda & Max Anderson; his grandchildren, Gabrielle & Lee Bailey and Alex Anderson; his great-grandsons, Carter, Dakota, Taylor and River; his brothers and sisters, Henry Allen & Libby Conley, Maxine Morehead, Mary Mae & Phillip Ramsey, Jim & Ginger Conley and Debbie & Ronnie Phillips; and numerous nieces and nephews, too many to list.
Funeral services will be held Thursday, January 30, 2020 at 2:00 P.M. at A. Vest & Sons Funeral Home, White Gate, with his brothers, Rev. Henry Allen Conley and Minister Jim Conley officiating. Burial will follow in Roselawn Memorial Gardens, Princeton, WV.
The family will receive friends at the funeral home on Wednesday, January 29, 2020 from 5:00 P.M. until 7:00 P.M.
The Conley family is in the care of A. Vest & Sons Funeral Home, White Gate, avestandsons.com, (540) 921-2985.
Published on January 27, 2020
To send flowers to the family of Dewey Levi Conley, please visit Tribute Store.

Send flowers
in memory of Dewey

A place to share condolences and memories.
The guestbook expires on April 26, 2020.

Heavenly Light was purchased for the family of Dewey Levi Conley.  Send flowers

To Dewey's family , we have good memories of Dewey when he was a minister with the Bozoo Christian Church in our area. His life reflected his love and devotion to God and Jesus Christ.
His family is in our prayers for comfort and peace.